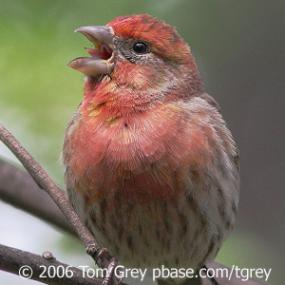 In March, we welcome the lengthening days and the renewal of bird song. Among the earliest spring singers in the Northwest is this House Finch, whose sweet, jumbled song carries along city blocks and rocky canyons. And spring songs are breaking out all over the country. Listen to the song of the House Finch, plus the songs of the Fox sparrow, the American Robin, and thousands of others at Cornell University's Macaulay Library website. Learn more about these birds at All About Birds.

This is BirdNote!
[House Finch song, repeated]
In March, we welcome the lengthening days. As the gray of Northwest winter gives way at last to spring, nothing freshens the new season like the renewal of bird song. [House Finch song, repeated]
This month, three groups of birds tune up their musical voices.
First, and among the earliest spring singers, are birds that reside in the Northwest year round. One such bird is the House Finch, whose sweet, jumbled song carries along city blocks and rocky canyons throughout the Northwest. [House Finch song, repeated]
Second, we hear the early spring voices of birds that stopped over here for the winter, like the lilting, whistled notes of this Fox Sparrow [Sooty Fox Sparrow song]. The Fox Sparrow will fly north for the summer to sing and nest in the thickets of Alaska’s Aleutian Islands. [Sooty Fox Sparrow song]
And the third chorus of voices belongs to birds now migrating from farther south, like many of our early spring American Robins. Some robins will stay to nest in the Northwest, and others will continue on. [American Robin song] Some will migrate far enough north to catch up with those Fox Sparrows departed to Alaska, making for a lovely duet [American Robin song and Sooty Fox Sparrow song].
Tune up your ears anytime, when you come to our website, birdnote.org. I’m Frank Corrado.
#