Does the same robin nest in your yard, year after year? Probably not... 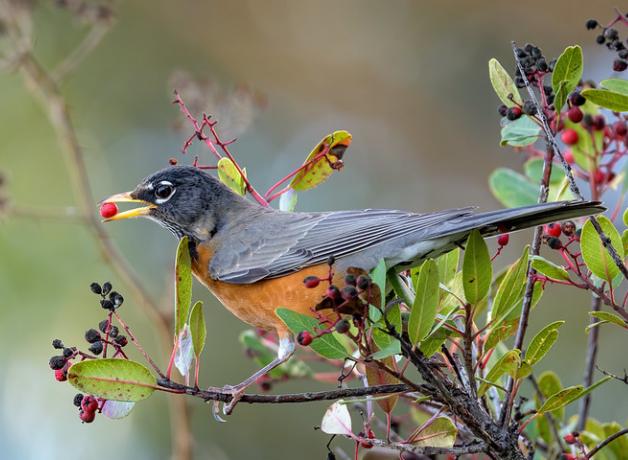 If a young American Robin survives its first winter, its chances of survival go up. But robins still don’t live very long. The oldest robins in your yard might be about three years old (although thanks to banding, we know of one bird that lived to be almost 14).

Adapted from a script written by Dennis Paulson

That pair of robins that keeps coming back to your yard to nest every year? They might not be the same two birds.

Mortality rates are high in robins and other songbirds. American Robins have about a 50-50 chance of living through the year.

If a young robin makes it through its first winter, its chances of survival go up. But robins still don’t live very long. Thanks to banding, we know of a robin that lived to be 14 years old. But the robins in your yard are probably no more than about three years old.

Robins and most other migratory birds find new mates each spring. After the last fledglings leave in the fall, adult robins go off on their own. However, if the same male and female make it back to your yard the following spring, there’s a high likelihood they’ll get back together.

If a robin outlives its mate, it may find another partner to mate with -- but keep coming back to that same shrub outside your window.  So over the years, you’ve probably had many different sets of robins in your yard — even if it looks as if the same pair of robins has returned.

American Robin — More at the Audubon Guide to North American BirdsAmerican Robin - More at All About Birds.Robin Life Cycle – More at Journey North