Protected by the crown! 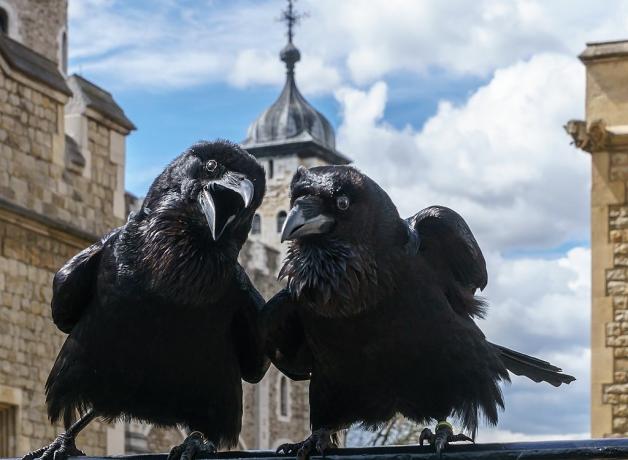 The Tower of London has a long and notorious history of murderous political intrigue, dungeons, and famous beheadings. And for more than 300 years, the tower has also been home to a set of royally maintained ravens. Since the time of Charles II, at least six ravens have - by royal decree - made their home in the tower. They are given ample food, comfy quarters, and private burials in the moat near Traitor's Gate. You can learn more at Historic-UK.

The Royal Ravens of the Tower of London

This is BirdNote!
[Common Raven calling]
The Tower of London has a long and notorious history. It has been the site of murderous political intrigue, dungeons, and famous beheadings, as well as a safe place to stash the Crown Jewels. And for more than 300 years, the Tower of London has also been home to a set of royally maintained ravens. [Common Raven calling]
Legend has it that in 1666 – the time of Charles II and the Great Fire of London – ravens were vilified as scavengers of the dead. When asked to rid London of all ravens, including those in the tower, the king consulted his soothsayer, who foretold disaster for England and the king if the ravens were killed. The ravens would live, the king proclaimed, and be given the royal treatment. To this day, a Yeoman Raven Master cares for six ravens in the tower. The ravens are given ample food, comfy quarters, and private burials in the moat near Traitor’s Gate. [Common Raven calling]
The ravens live out their lives happily in the tower – which is a lot more than can be said for Anne Boleyn, Thomas More, and Sir Walter Raleigh. [Common Raven calling]
You can see a picture of a royal raven when you come to our website, BirdNote.org. [Common Raven calling] I’m Frank Corrado.
###
Call of the Common Raven provided by The Macaulay Library of Natural Sounds at the Cornell Lab of Ornithology, Ithaca, New York. Recorded by R.S. Little.
Producer: John Kessler
Executive Producer: Chris Peterson
© 2012 Tune In to Nature.org     November 2012     Narrator: Frank Corrado