A woodpecker sets up a roadblock! 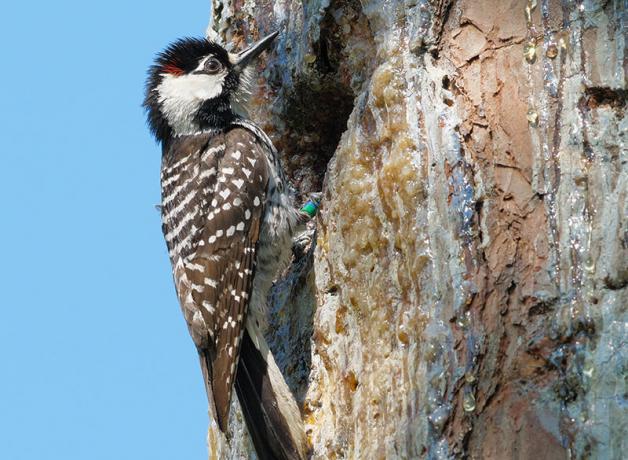 After carving a nest cavity in a living tree, which can take a year or more, Red-cockaded Woodpeckers peck holes around the nest, causing sap to flow downward. This creates a barrier to thwart hungry snakes. The mature longleaf pine woods where these endangered birds live are shrinking. Recovery efforts have been slow, but the birds will inhabit man-made nest cavities, resulting in an increase of nesting pairs in some areas.

Special thanks to Tara Tanaka for this photo, which also appears on the 2021 Birds of BirdNote calendar, available here.

This is BirdNote.
[Southeastern forest ambient]
In a Southeastern forest, a six-foot-long rat snake slithers up the trunk of a large longleaf pine tree. The hungry snake is climbing the rough bark toward a woodpecker’s nest hole for a meal of eggs. But the snake’s in a sticky situation — literally. A few feet below the nest, the snake encounters a sheet of pine sap, a roadblock that sends it back down the tree, hungry.
The nest belongs to a family of Red-cockaded Woodpeckers. After excavating a nest cavity in a living tree — which can take a year or more — the birds peck holes around the nest cavity, causing sap to flow downward, a barrier to climbing predators.
[Red-cockaded Woodpecker calls, https://macaulaylibrary.org/asset/146799371#_ga=2.243188938.998607689.1…]
The mature, open longleaf pine woods the woodpeckers require are largely gone, and the birds have been designated as endangered for more than 50 years.
There is some good news: the woodpeckers seem happy to inhabit man-made nest cavities cut into large trees. And the number of nesting pairs has increased in some areas.
[Red-cockaded Woodpecker drum, https://macaulaylibrary.org/asset/215674021#_ga=2.205958107.998607689.1…]
If more of their forest habitat is protected, these rare woodpeckers will have an even better chance at survival. After all, they’ve already figured out how to deal with pesky snakes.
For BirdNote, I’m Michael Stein.
[Red-cockaded Woodpecker calls, https://macaulaylibrary.org/asset/203918431#_ga=2.235400265.998607689.1…]
###
Senior Producer: John Kessler
Production Manager: Allison Wilson
Editor: Ashley Ahearn
Producer: Mark Bramhill
Associate Producer: Ellen Blackstone
Bird sounds provided by The Macaulay Library of Natural Sounds at the Cornell Lab of Ornithology, Ithaca, New York. ML105749 Red-cockaded Woodpecker, recorded by G Keller, used as feature at 0:05 and as ambient through 0:50.  ML146799371, recorded by L Mae, from 0:50 - 1:05. ML215674021, recorded by D Grimes, from 1:10 - 1:30.
BirdNote’s theme was composed and played by Nancy Rumbel and John Kessler.
© 2020 BirdNote   January 2021    Narrator: Michael Stein 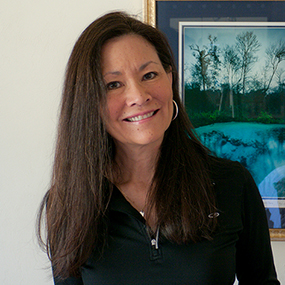 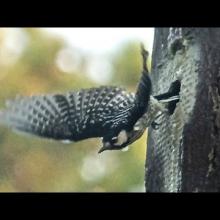 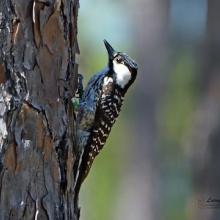