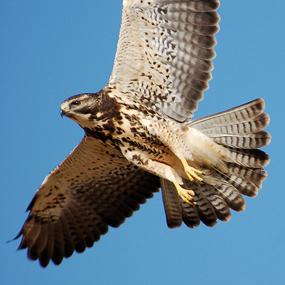 William John Swainson, ornithologist, author, illustrator, was born in October 1789. He settled in New Zealand, and it's quite likely that he never saw any of the birds named for him. But because of Swainson's reputation and knowledge about birds, the Swainson's Warbler, Swainson's Thrush, and Swainson's Hawk — like this one — were all named in his honor. In fact, John James Audubon himself named the Swainson's Swamp-Warbler.

Nimble notes ring out from a tangle of vines in the southern US. [Song of Swainson’s Warbler]

On the western High Plains, a raspy scream. [Call of Swainson’s Hawk]

A flute-like song spirals upward in the cool evening of a northern forest. [Song of Swainson’s Thrush]

Born in England in October 1789, Swainson made his name as a zoological illustrator. After one trip to Brazil, he described himself as "a bee loaded with honey", bringing home a collection of over 20,000 insects, 1,200 species of plants, drawings of 120 species of fish, and about 760 bird skins. [Song of Swainson’s Thrush]

Swainson's career was sporadic, though, so in 1841 he emigrated to New Zealand in search of better fortunes. He remained a controversial figure, even though John James Audubon called him an “excellent and learned author.”

And it was Audubon himself who was responsible for christening the Swainson's Swamp-Warbler. [Song of Swainson’s Warbler]