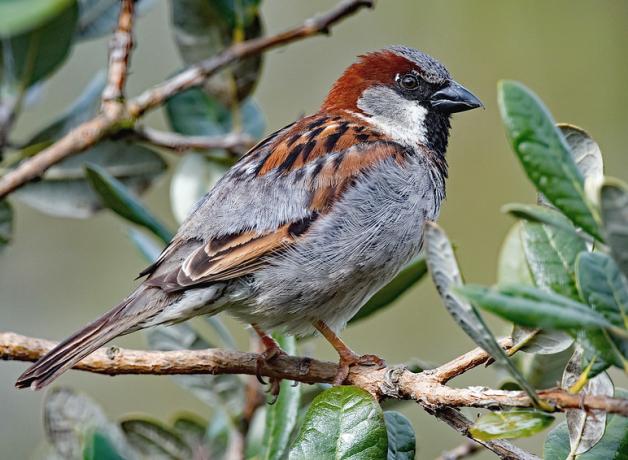 As an old story from Germany goes, workers building the world’s tallest church were preparing to install an immensely long beam, but they couldn’t get it through the city gate. Preparing to dismantle the city wall to clear a path to the construction site, workers saw a House Sparrow carry a long piece of straw up to a crevice, then turn the straw lengthwise. The builders slapped their foreheads and did the same.

If you ever miss a BirdNote, you can always get the latest episode. Just tell your smart speaker “play the podcast BirdNote.”

The Wisdom of the Sparrow

This is BirdNote.
[House Sparrow (162851)]
Sometimes, when a problem seems just too difficult for human ingenuity, it pays to look to nature for a solution.
Here’s an old story from Germany, about the building of the world’s tallest church 650 years ago. Construction like that is not without its challenges.
One day,  the workers were preparing to install an immensely long beam, meant to span the entire length of the church. The only problem: they couldn’t get it through the city gate.
The solution they came up with was to dismantle the city wall to clear a path to the construction site.
But just then, as the frustrated builders watched, a House Sparrow carried a long piece of straw up to a crevice. The bird tried and tried to fit the straw into its nest and was foiled again and again.
Finally, the sparrow turned the straw lengthwise and slipped it easily into the nest.
The builders slapped their foreheads and did the same, turning the beam lengthwise.
It’s a joke, of course, but a good enough joke that the good-humored people of Ulm have adopted the House Sparrow as the city’s unofficial mascot — a reminder that even little minds can sometimes solve big problems.
For BirdNote, I’m Michael Stein.
Support for BirdNote comes from Bloomsbury, a publisher of natural history books and birding guides. Critical Critters by Ralph Steadman and Ceri Levy is available now.