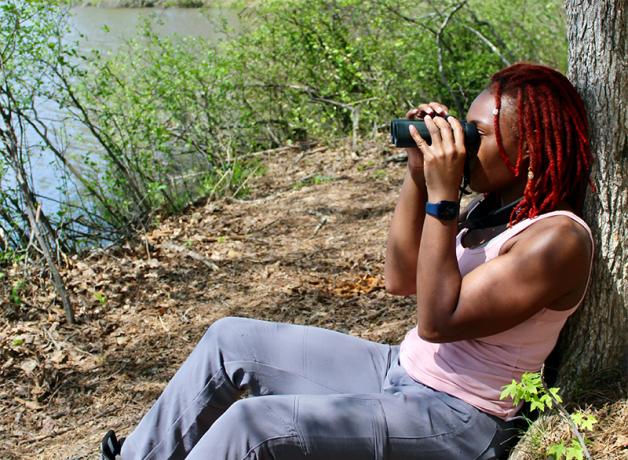 In this episode, urban ecologist Deja Perkins talks about how many bird species live right within bustling cities. Whether you’re on your porch, at your local park, or the parking lot of your favorite store, you can find birds. Deja suggests taking five minutes to focus your attention on birds. Look up in the sky, along power lines and the tops of buildings. Close your eyes and listen — past the sounds of traffic — for the songs of nearby birds.

This is BirdNote. I’m Deja Perkins, an urban ecologist, and I’d like to give you a crash course on urban birding.

There’s nothing like the sound of the Eastern Towhee reminding you to “drink your tea” first thing in the morning. In the eastern U.S., these are not birds you have to travel far to see. In fact, you can see the Eastern Towhee and many other birds just by taking a walk around your neighborhood.

One of the reasons I love birds is that you don’t have to go far to find them. You can sit on your porch, at your local park or even the parking lot of your favorite store and you will find birds. All it takes is at least 5 minutes of mindfulness.

If you don’t see anything right away, don’t be discouraged. Remember to look up! Maybe you will catch a vulture soaring overhead on a warm breezy day, or the flash of red on a Red-tailed Hawk as it soars by. 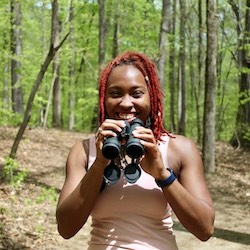