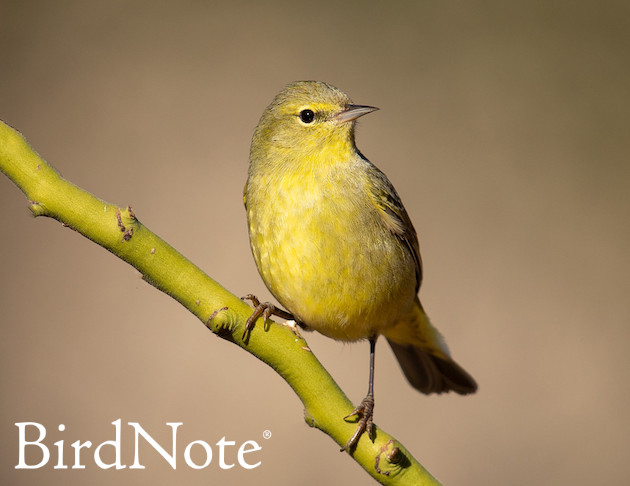 BirdNote has always had a magical ability to draw people in, invite them to pay attention to birds, and inspire them to care about the world that birds inhabit. I’m thrilled to report that in 2021, more people in more places listened to BirdNote for more time than ever before. BirdNote Daily continues its 17-year run, now on over 250 public radio stations. In 2021, we released the second season of our podcast Threatened and premiered Bring Birds Back. Both of these podcasts are already so popular that they rank in the top 2% of all podcasts globally.

We have many people to thank for setting us up for success and continued growth in 2021—in particular, the record number of people who donated to BirdNote last year, the dedicated members of our Board of Directors, and two of the longest-serving BirdNote team members in our history, Sallie Bodie and Ellen Blackstone, who both bid farewell to BirdNote (at least on paper) in 2021.

While a pandemic, the increasing ravages of climate change, and political turmoil have impacted everyone on the planet over these past two years, let’s remember that we can always invite forces of harmony and healing into our shared experience. Paying attention to the lives of birds and creating shared experiences in the joy of birding are things that require little more than a few moments each day, and it is our honor and privilege to be working to invite people into those moments, inviting a practice of mindfulness and care for the world around us. Thank you for taking a moment to review our Annual Report, for celebrating BirdNote’s 2021 successes with us, and for being part of what we hope will become even bigger successes in 2022. 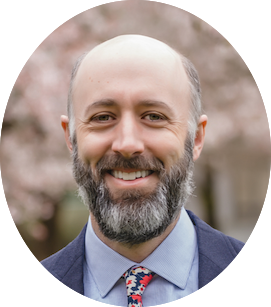 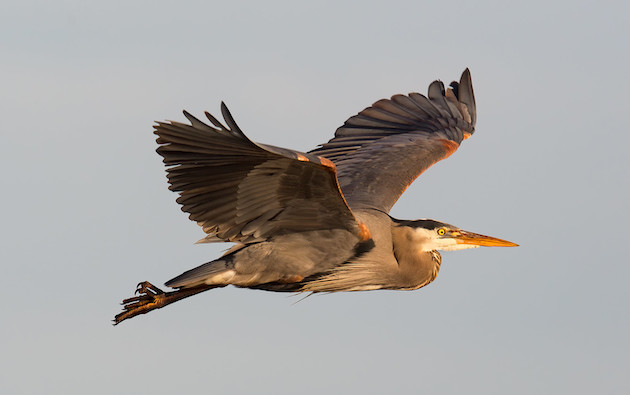 BirdNote Daily, BirdNote’s flagship two-minute radio program, continues to grow as we expand the scope of our storytelling. 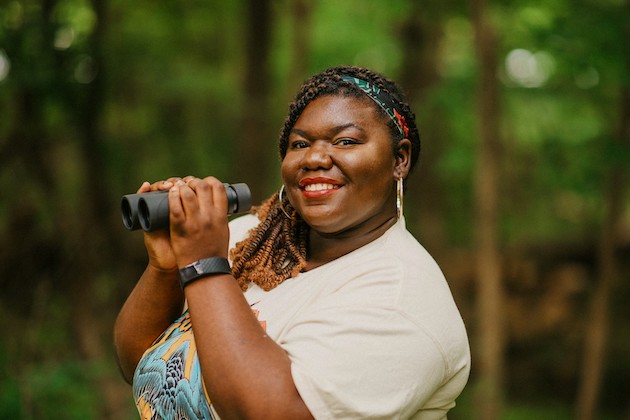 Bring Birds Back is a new longform podcast about the joy of birds and the ways that humans can help them through simple, everyday actions.

Few people know that the population of breeding birds in North America has declined by nearly one-third since 1970 — a loss of 2.9 billion birds. Even fewer know that some of the solutions are within reach. It all starts at home with our pets, our windows, and even the coffee we drink.

Like many birders, host Tenijah Hamilton discovered her love of birds during the pandemic. In Bring Birds Back, she invites listeners to join her in appreciating the beauty and mystery of the birds all around us and taking action on their behalf. Tenijah speaks with bird enthusiasts from many different backgrounds, identities, and communities. Listeners follow along with her as they learn how to bring birds back together.

The first season of Bring Birds Back was sponsored by the Cornell Lab of Ornithology. The podcast received critical acclaim from The Natural Resources Defense Council, Outside Online and the Podcast Delivery newsletter. 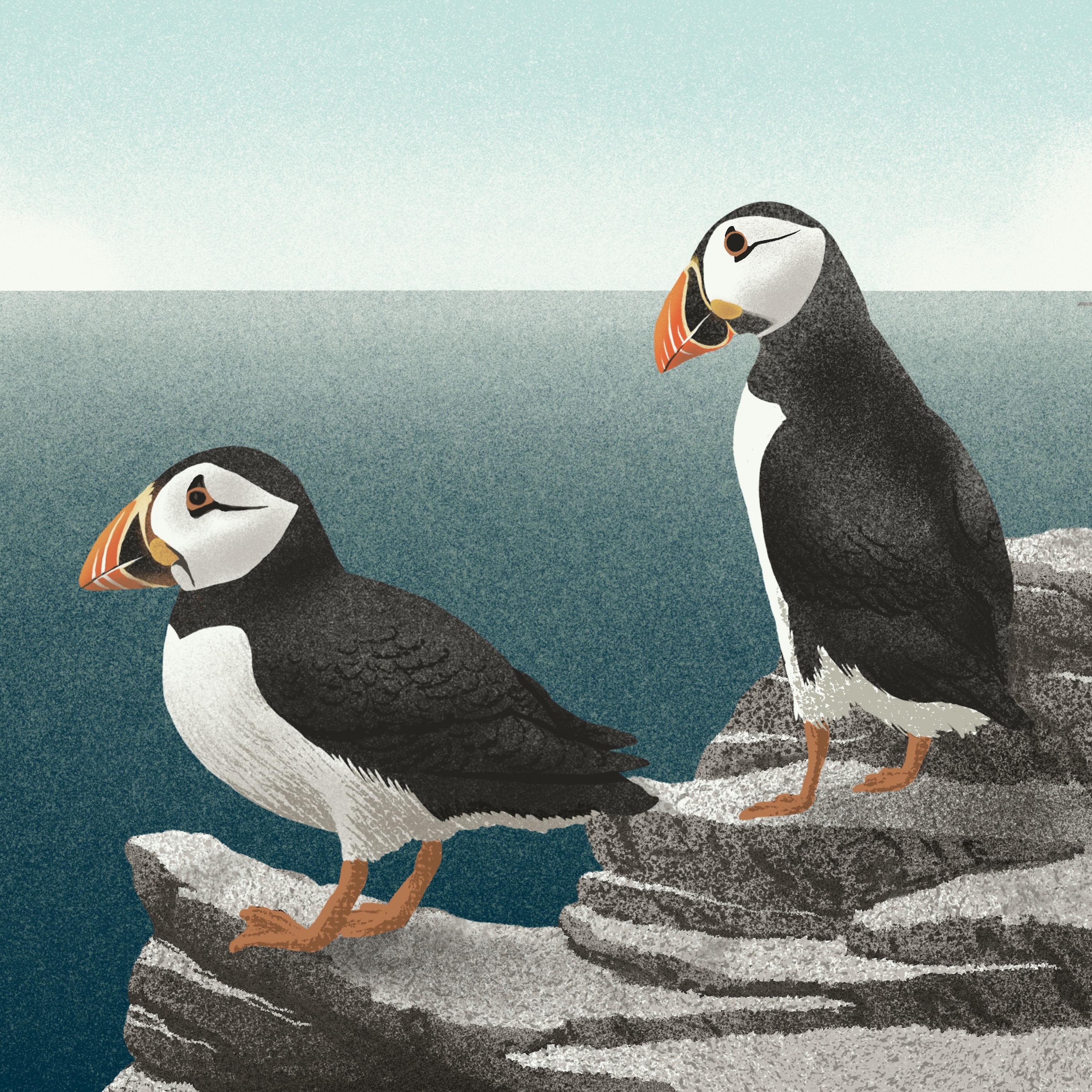 Threatened is a podcast about answering the call to protect the birds and places we love. In July 2021, BirdNote released the second season of the show.

The songs and sounds of birds are all around us. What can we learn when we stop to listen? In season 2 of Threatened, host Ari Daniel explores stories from around the world about people who are taking action on behalf of our fragile ecosystems and the birds that depend on them. Season 2 begins with Sunny Tseng, a PhD student at the University of Northern British Columbia and a researcher at the Endemic Species Research Institute in Taiwan. The unexpected appearance of a Siberian Crane in Taiwan put Sunny on a life-changing path. Another episode of Threatened, season 2, features The Joe Farm in Newbern, Alabama. Despite the odds, the Joe Farm creates a safe space for birds and birders.

You can catch up on both seasons of Threatened, and stay tuned for the third season coming in July of 2022. 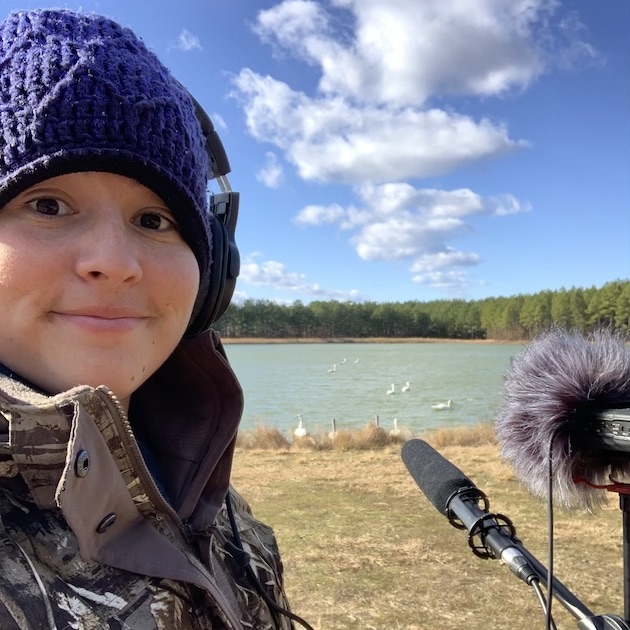 BirdNote begins behind the microphone. In addition to familiar favorites Michael Stein and Mary McCann, new producers, narrators and storytellers joined forces with BirdNote to share the joy and wonder of birds.

Ariana Remmel, pictured above, is a chemist turned journalist who is passionate about exploring the world through the lens of science and discovery. Ariana wrote and narrated each installment of the Migrations series on BirdNote Daily. Ariana continues to use their expertise in ornithology and science communication when narrating, writing, and producing many new BirdNote Daily episodes. Browse shows that Ariana has contributed to, using this link.

Dr. Wenfei Tong is a biologist with a passion for understanding and conserving the natural world. Wenfei has written and narrated multiple popular BirdNote Daily episodes in 2021, including “The Power of Albatross Partnerships,” “The Best Nest,” and “Feathered Females in Charge.” Wenfei’s two books, Bird Love and How to Read A Bird, use scientific discoveries to show how much humans and birds share, including some of literature’s most basic themes. Her ultimate aim is to inspire as many people as possible to care for and thus protect birds. You can see each BirdNote Daily episode that Wenfei has contributed to, using this link.

Tenijah Hamilton is the host of BirdNote’s hit podcast, Bring Birds Back. Tenijah is an experienced science communicator and educator. Over the course of Bring Birds Back season one, Tenijah led listeners through the many troubles that birds face today, and the many ways that everyday people can help them. Listen to the Bring Birds Back podcast here.

The second episode of Threatened, season 2, was produced by Claire Reynolds, reporting from western Georgia. Listen to “Red-cockaded Woodpeckers and the Endangered Species Act” here.

Threatened, season 2, episode 4 was produced by reporter Nick Mott. In this installment of the podcast, Nick travels through the polluted area around Butte, Montana to peer into the lives of Ospreys to see what they reveal. Listen to “Ospreys and Environmental Restoration” here.

Producers Paul Drury-Bradey and Nick Granville-Fall brought us “Puffins: Cute to Catalyst” – the fifth episode of Threatened, season 2. Listen in to hear how puffins could spark interest in addressing climate change, reducing and cleaning up plastic waste, and other human-caused challenges that threaten their existence.

In Threatened, season 2, episode 6, producer ish Mafundikwa takes us on a road trip around Zimbabwe to explore the issues affecting the country’s six species of vultures – five of which are critically endangered and at risk of extinction. Listen to Vultures in Zimbabwe here.

Birdnote's audience has grown tremendously in 2021. From BirdNote Daily to our longform podcasts, we are excited by how far the BirdNote community is expanding. 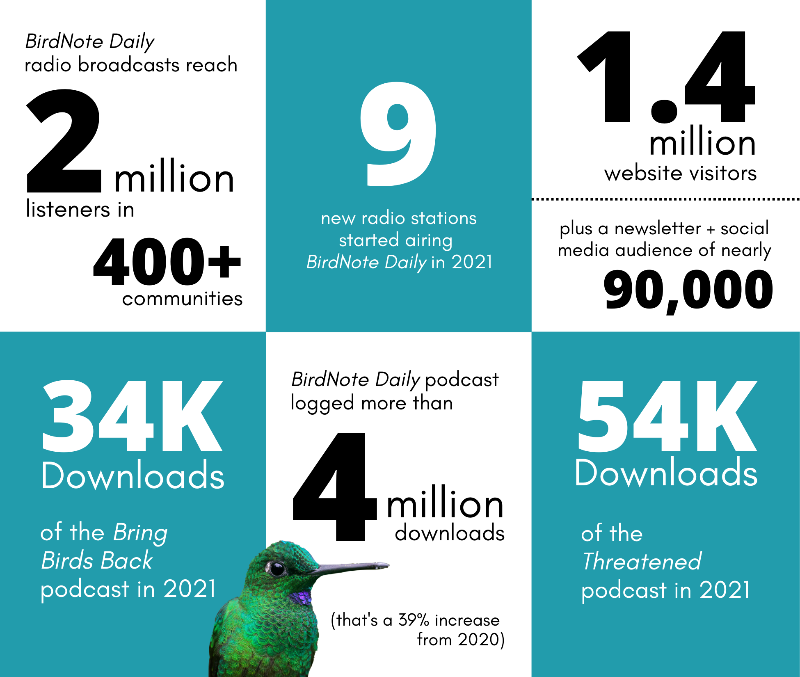 BirdNote operates on the simple premise that the joy of birds is a unifying force between people of all walks of life. In 2021, the BirdNote team began working with The Aspire Group to draft and implement a statement regarding Inclusion, Diversity, Equity, and Accessibility in our organization. We are pleased to share that this statement became official policy, per a unanimous vote of the Board of Directors.

The long and ongoing history of racial oppression in the United States and the centering of white people and privileged groups throughout much of the mainstream environmental movement requires us to intentionally practice antiracism in our organizational processes and media production. BirdNote is committed to creating the inclusive environmentalism we want to see in the world.

Now that BirdNote’s IDEA statement is official policy, the work toward achieving the goals and tactics around this policy can take place. In 2022, BirdNote plans to ensure that our content lives up to our IDEA values as outlined in the statement. We will also work toward developing a BirdNote team that reflects the diversity of the audience we seek to reach. This work will allow us to reach a broader and more diverse audience. Finally, we will establish equity as a leadership practice and priority.

We are excited by the support BirdNote is receiving from listeners, donors, and other folks in the BirdNote community around the execution of our IDEA objectives. Thank you for taking this journey with us. 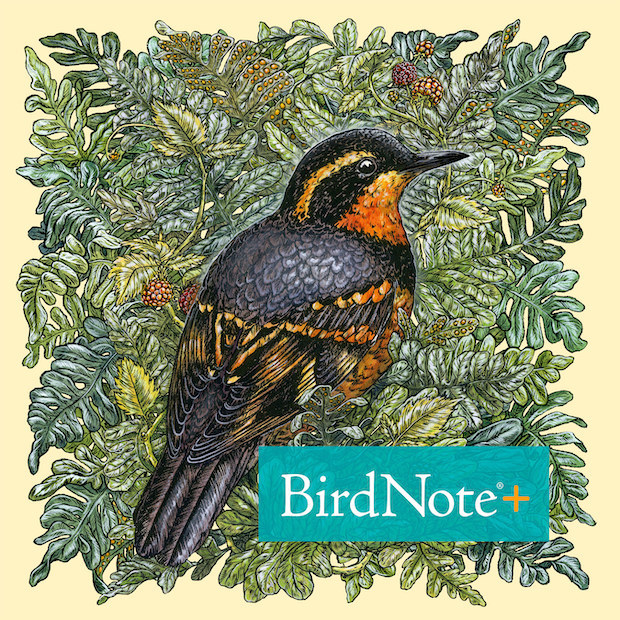 BirdNote+ subscribers receive bonus content features such as an ad-free listening experience, access to “behind-the-scenes” interviews with show hosts, and advance invitations to virtual events. As always, BirdNote’s content remains fully accessible and free of charge to everyone, and the BirdNote+ experience is an avenue for pod fans to financially support our work and mission.

A Growing Base of Support 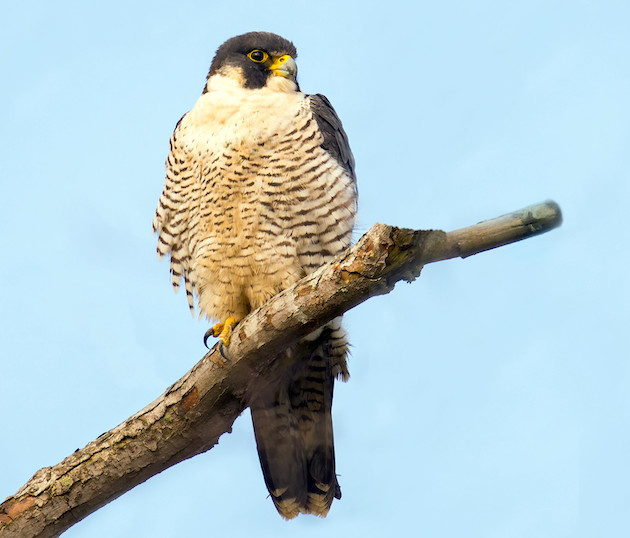 Thank you for making 2021 our best year ever! In 2021, BirdNote raised more dollars from more contributors than any previous year in our history. BirdNote fans can be found in all 50 states and internationally. We received nearly 7,000 donations from more than 3,000 amazing individuals like you, raising more than $1.1M to create compelling programs that inspire care for our natural world. These figures represent 8% more donors than in 2020, and a whopping 81% growth in our donor base from 2019. Thank you! 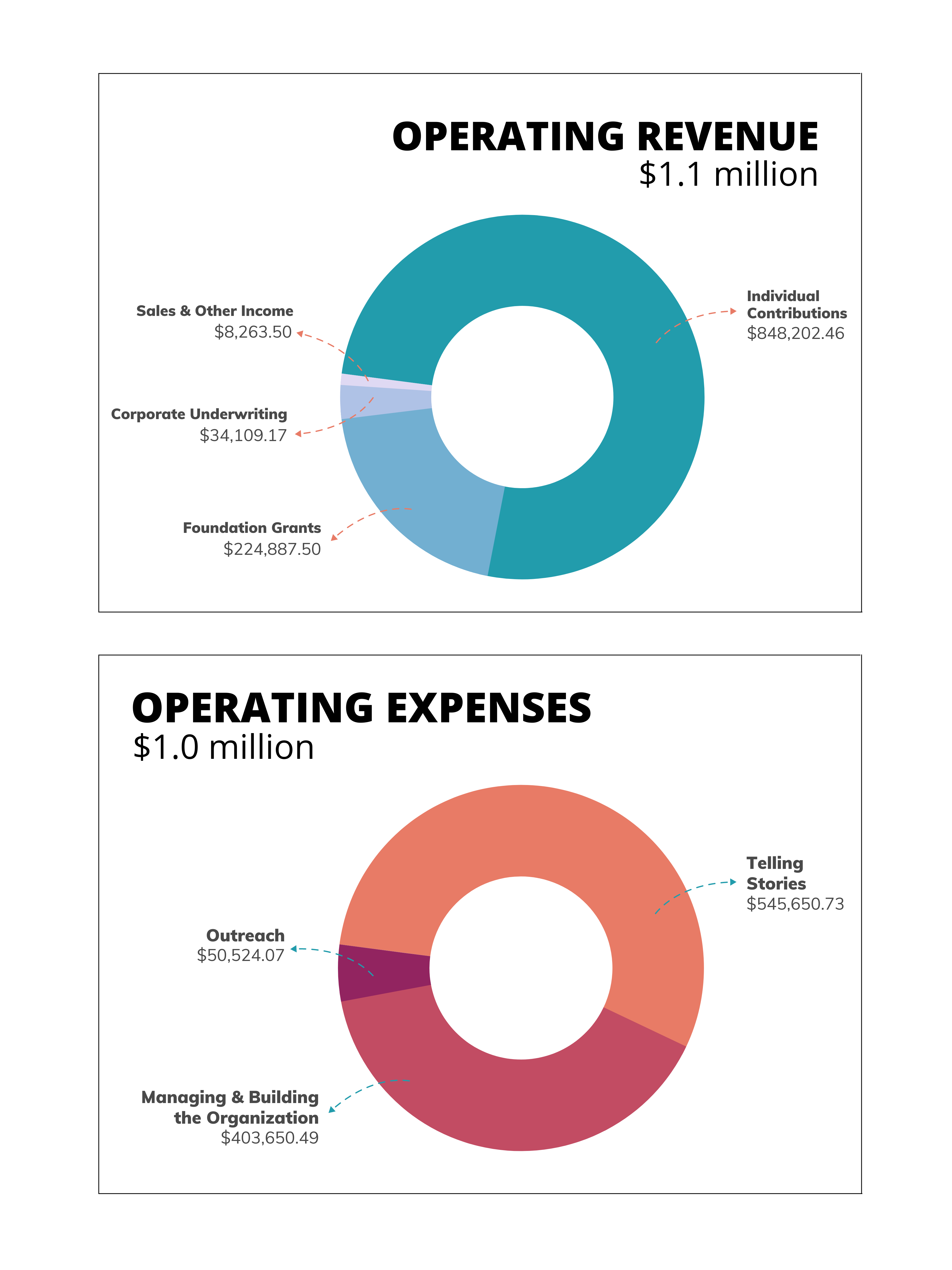 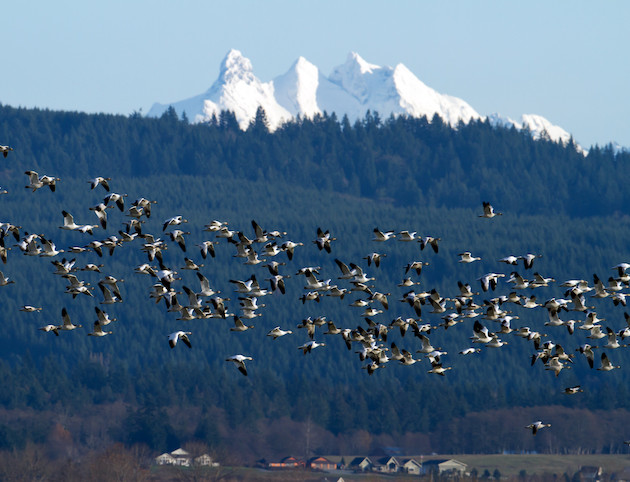 We are deeply grateful to each of our donors and to the following program partners for your support and belief in our mission:

BirdNote's contributing photographers, who freely share their images for use on our website, in social media, and in other communications.

Cognition Studio, for in-kind contributions of web and design services, and to Kristine Johnson for serving as design advisor for the new BirdNote website.

KNKX, BirdNote’s flagship radio station, along with more than 200 stations and outlets in North America, for sharing our programs.

The Macaulay Library of the Cornell Lab of Ornithology, for providing most of the bird sounds and video content featured in BirdNote shows.

Seattle Audubon Nature Shop for being our exclusive retail partner for all your shopping needs.

On the air: find a station near you that broadcasts BirdNote Daily.

Via podcast: subscribe to BirdNote Daily through your favorite podcast app, such as Apple Podcasts and Spotify. 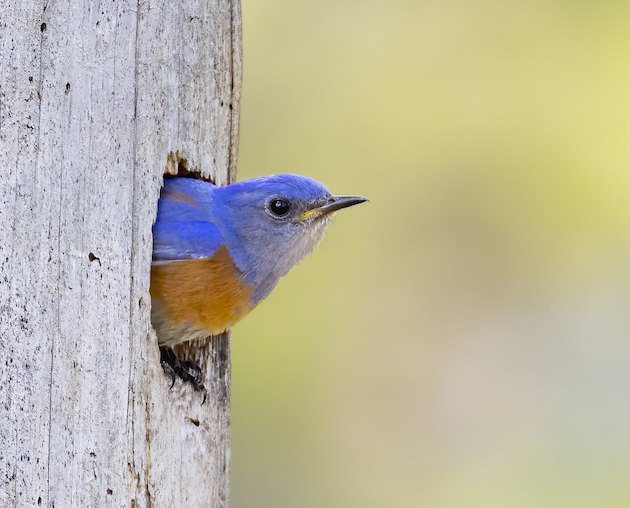 BirdNote is made possible by the incredible support of our passionate donors. Thank you for your generosity over the past year. We’re excited to show you what we have in store for 2022. 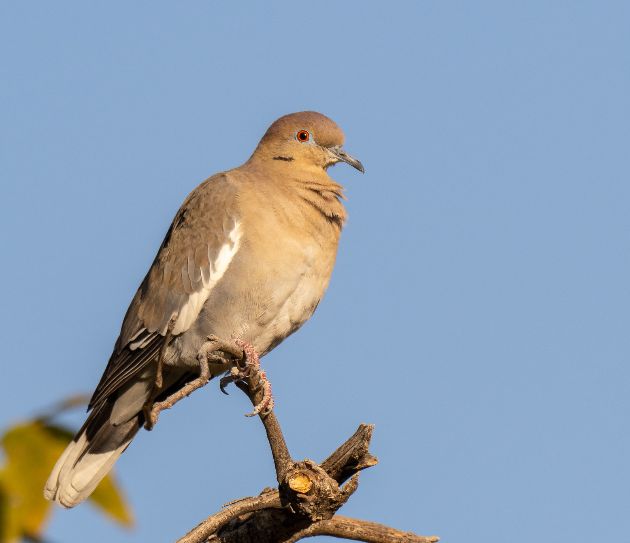 Birds connect us with the joy and wonder of nature. By telling vivid, sound-rich stories about birds and the challenges they face, BirdNote inspires listeners to care about the natural world – and take steps to protect it.

BirdNote Team
Meet our staff, board members, volunteers, and other team members.

BirdNote Conservation Partners
Connect with BirdNote’s partners and get involved in conservation.

Support BirdNote
Your donation makes BirdNote programming free and accessible to all.

Illustration of Atlantic Puffins
by Clint McMillen at Braincloud Design